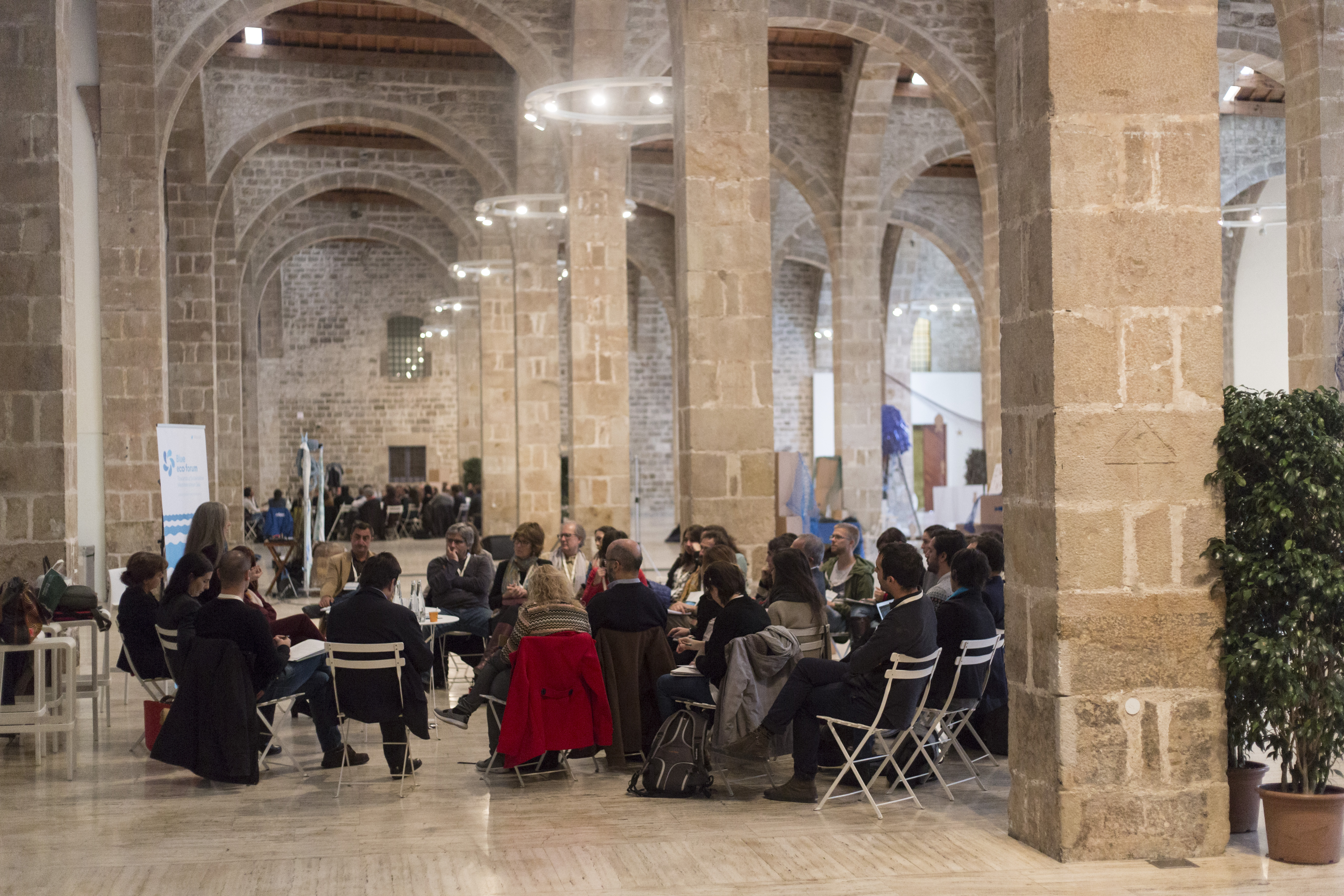 • The first edition of the Blue Eco Forum, co-organized by eco-union, EUCC and Fundació ENT, brought together around twenty international experts to focus on the sustainable challenges of the Mediterranean region.

• A report by eco-union, GEC and MIO-ECSDE places Spain among the countries lacking an up-to-date policy strategy for sustainable development, together with Albania, Bosnia and Herzegovina, Cyprus, Egypt and Slovenia

• More than 90% of fish stocks in the Mediterranean are overexploited and many species, such as hake, are declining

• Marine waste, the refugee crisis, the sea and coast managements and the blue economy development, are among the topics discussed in the forum, held at the Museu Marítim of Barcelona

Barcelona, November 25, 2016 – Promoting policies to reach blue and green economy is fundamental to guarantee the sustainability of the Mediterranean area in the future. This was one of the conclusions highlighted by the twenty international experts who participated in the first edition of the Blue Eco Forum, which brought together representatives of public, private and third sector at the Maritime Museum of Barcelona. In this sense, Spain is among the Mediterranean countries whose strategy of Green Economy and sustainable development policy is out of date, along with Albania, Bosnia-Herzegovina, Cyprus, Egypt and Slovenia, according to a report on 20 countries in the area Mediterranean that has been shared during the Blue Eco Forum.

The ‘ Green Economy Report’, an initiative from eco-union, Green Economy Coalition (GEC) and MIO-ECSDE, was officially launched last week at COP-22 in Marrakech. The main conclusion is that only five countries in the Mediterranean area – France, Italy, Morocco, Portugal and Tunisia – have an adequate Green Economy and Sustainable Development policy. These types of policies take into account aspects such as the participation of citizens in the development process and respect for ecological limits and social equality. As said, Spain, has no strategy and the remaining countries – Algeria, Croatia, Greece, Israel, Jordan, Lebanon, Malta, Montenegro, Palestine and Turkey – are at an intermediate point between the two previous groups.

The study was based on a review of existing policies and a survey of 300 international experts coming from the countries analyzed. The report also includes a series of recommendations for a transition towards a green and blue economy in the Mediterranean area. “Embracing the Green Economy and Sustainable Development policies is perhaps the only option that could make a more secure, equitable and prosperous society in the Mediterranean region in the future“ said Jeremie Fosse, eco-union president, director of the Blue Eco Forum and one of the authors of the study.

The Secretary of Environment and Sustainability of the Generalitat de Catalunya, Marta Subirà, who was in charge of inaugurating the day, highlighted: “The sea has always been driving our economy and offers an important potential for innovation and growth. This economic engine must be compatible with the preservation of marine ecosystems and must ensure the sustainability of future generations. We have to work to boost the blue economy, since the economy we have known so far has not solved the challenges of our planet. We are talking about a non-polluting, circular and efficient economy that uses sustainable resources and patterns and reduces environmental risks. These are characteristics that should be included in the same concept of economy. “

90% of fish stocks are overexploited

Among the many challenges to be overcome in order to achieve a sustainable development of the Mediterranean Sea and its environment, should be included clear measures that curb the current overfishing that is threatening numerous species. “This is a critical moment for the health of the Mediterranean Sea. Currently, over 90% of the fish stocks evaluated are overexploited and many species, such as hake, are in sharp decline. For these reasons it is essential to establish bridges between the administration, fishermen, the scientific community and civil society to collectively seek strategies that will enable us to ensure future fishing and restore the health of marine ecosystems, “said Lydia Chaparro, Marine ecologist of the ENT Foundation and responsible for the workshop on fisheries at the Blue Eco Forum.

The marine litter management is another aspect that was addressed throughout the different sessions of the forum. In this regard, Carolina Pérez, director of the EUCC Center Mediterrani and moderator of the workshop on marine litter, said: “The Mediterranean, because of its physical, demographic and socio-economic characteristics, is one of the seas of the planet most affected by marine litter. Although the problem was identified decades ago, it reached the political agenda recently as one of the millennium’s challenges. We have been given a political and legal framework to develop instruments to reduce it and has been invested in a more coherent way to deepen the knowledge of the problem. That is why the Blue Eco Forum takes place at the ideal moment to know the latest advances, identify gaps, knowledge and define the priorities to get closer to the reduction targets agreed for 2020 in Europe and 2025 For the whole Mediterranean area “.

Multiple crises in the Mediterranean area

Coastal and maritime policy strategies, migration, governance and participatory processes in the Mediterranean region were also present in the forum. “The Mediterranean Sea, which has united us for centuries, is suffering multiple crises that threaten our common future: refugee waves, environmental catastrophes, social inequalities and unemployment. At the Blue Eco Forum we have reflected collectively on how we can re-create a space of prosperity and security in the Mediterranean that involves civil society, business and governments “said Jeremie Fosse, director of the Blue Eco Forum.

“If we are unable to welcome our Mediterranean comrades who suffer from war and hunger, it will not only mean that the sea is sick, it will mean that our entire community is seak,” added Ecology Commissioner of the Barcelona City Council, Frederic Ximeno  Present at the opening session of the day. “We must promote actions to make Barcelona a benchmark of Mediterranean cities that want to change the logic of the current situation.”

The program of the Blue Eco Forum was completed with the cultural agenda of the Blue Eco Festival, with activities were opened to citizen participation, such as the project exhibition Marviva, the screening of the environmental documentary ‘Desierto Líquido’ with the presence of the directors, and a mapping and visual art show projected on the façade of the Maritime Museum.